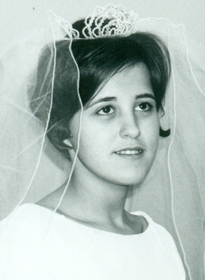 Memorial Candles Lit for Christine | SEE ALL
Click to Light a Memorial Candle for Your Loved One
"We are honored to provide this Book of Memories to the family."
— Flynn & Dagnoli-Montagna Home for Funerals-Central Chapel
Send
Flowers Service Details
& Obituary View
Tributes Leave a
Condolence Light
a Candle More

Christine Marie (Coury) Zdon, 67, of North Adams, MA died on Saturday, May 13, 2017 at Berkshire Medical Center in Pittsfield. She was born in Adams, MA on December 8, 1949 a daughter of the late Karey Joseph and Cecelia Veronica (Russell) Coury.
She attended local schools, and went on to work as a cook at St. Francis of Assisi Church in North Adams. She also worked as a private caregiver. She was a devoted mother, daughter, and homemaker.
She was the widow of John E. Zdon, whom she married on January 27, 1968. He died on August 31, 2016. Survivors include a son Jamie Zdon of Cheshire; a daughter Tammy Zdon of North Adams; two grandchildren Arica Schnopps of Adams, and Michael Schnopps of Gardner, MA; three sisters, including her twin Sandra Lewis of Williamstown, as well as Cynthia Costello of Fort Lauderdale, FL, and Ann Coury of North Adams; a brother David Coury of West Palm Beach, FL; as well as several cousins, aunts, and uncles. She was predeceased by a sister Maria Coury.

FUNERAL SERVICES: A graveside service to celebrate the life of Christine Zdon will be held on Monday, May 22, 2017 at 1:00pm at Southview Cemetery in North Adams, MA. Donations in her memory can be made to PopCares Inc. through the funeral home. To add to the book of memories, please visit www.flynndagnolifuneralhomes.com