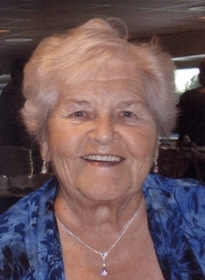 Memorial Candles Lit for Janet | SEE ALL
Click to Light a Memorial Candle for Your Loved One
"We are honored to provide this Book of Memories to the family."
— Flynn & Dagnoli Funeral Home
Send
Flowers Service Details
& Obituary View
Tributes Leave a
Condolence Light
a Candle More

Janet Mae (Wright) O’Neill, 86, of North Adams, MA died on Friday, July 13, 2018 at Hillcrest Commons in Pittsfield, surrounded by her family.
She was born in Clarksburg, MA on May 2, 1932 a daughter of the late Milford Peter and Stella Mae (Davis) Wright. She attended North Adams Schools, and graduated from Drury High School.
Janet worked in customer service at Storey Communications, at the Richmond Theater, and was last employed at Waverly Fabrics.
Janet was a member of the First United Methodist Church. She enjoyed gardening, reading, and was a fan of the Boston Red Sox. Janet had a great sense of adventure and especially enjoyed spending time with her children and grandchildren.
She was the widow of Richard Michael “Mickey” O’Neill, whom she married on August 23, 1952. He died on April 9, 2017.
Survivors include her daughters Debra O’Neill of Mobile, AL; and Dawn Shepard and her husband, Scott of Clarksburg, MA; son Richard D. O’Neill and his wife, Karen of Pittsfield, MA. She also leaves nine grandchildren; seven great grandchildren; as well as nieces and nephews. She was predeceased by her son David O’Neill who died on May 22, 1979; and her brothers Alton, Russell, and Carlton Wright.

FUNERAL NOTICE: The funeral for Janet O'Neill will be Friday July 20, 2018 at 10:00 AM at FLYNN & DAGNOLI-MONTAGNA HOME FOR FUNERALS WEST CHAPELS, 521 West Main St. North Adams, MA. Burial will follow in Southview Cemetery. Calling hours at the funeral home are Thursday from 4-7 PM. Memorial donations may be made to HospiceCare in the Berkshires or PopCares in care of the funeral home. To add to the Book of Memories, please visit www.flynndagnolifuneralhomes.com.