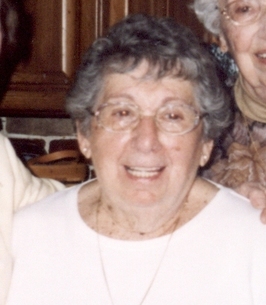 Memorial Candles Lit for Rita | SEE ALL
Light a Candle
"We are honored to provide this Book of Memories to the family."
— Flynn & Dagnoli-Montagna Home for Funerals-Central Chapel
Funeral Details Memory Wall Photos & Videos Send Flowers

Print
Rita (Fulginiti) Vecellio, 97 of North Adams, MA died Wednesday October 3, 2018 at North Adams Commons.
She was born in North Adams, MA on March 4, 1921 daughter of Joseph and Marianna (Jammalo) Fulginiti. She attended local schools.
Rita worked at Gale Shoe Co. and Wall-Streeter Shoe Co. and was last employed by North Adams State College for about nine years until her retirement in 1980.
She was a communicant of St. Elizabeth of Hungary Church. Rita enjoyed knitting, reading, and puzzles and especially enjoyed spending time with her grandchildren.
She was the widow of Domenick Vecellio who died on April 18, 1994. They were married on June 1, 1946 in St. Anthony of Padua Church.
Survivors include her three grandchildren-Gregory Vecellio of North Adams; Chelsea Vecellio of Burlington, VT and Jeffrey Vecellio of North Adams; her daughter in law, Nancy of North Adams and her son in law, Joseph DeLuca of Goffstown, NH. She also leaves her brother, Anthony Fulginiti of Melrose, MA and nieces, nephews and cousins. She was predeceased by her son, Dominick Vecellio on February 1, 2002 and her daughter, Mariann DeLuca on July 3, 2013. Three brothers and two sisters are also deceased including Mary Fulginiti, Angela Plati; Augustine, George and Nicholas Fulginiti.

FUNERAL NOTICE: A Liturgy of Christian Burial for Rita Vecellio will be celebrated Monday October 8, 2018 at 11:00 AM at St. Elizabeth of Hungary Church. Burial will follow in Southview cemetery. A calling hour at FLYNN & DAGNOLI-MONTAGNA HOME FOR FUNERALS CENTRAL CHAPEL, 74 Marshall St. North Adams, MA will be Monday morning from 9:30 to 10:30 AM. Memorial donations may be made to St. Elizabeth of Hungary Church in care of the funeral home. To add to the Book of Memories, please visit www.flynndagnolifuneralhomes.com.


To send flowers to the family of Rita Vecellio (Fulginiti), please visit our Heartfelt Sympathies Store.

We encourage you to share any memorable photos or stories about Rita. All tributes placed on and purchased through this memorial website will remain on in perpetuity for future generations.

GS
Greg, Chelsea and Jeff, Our sincere condolences on the passing of your grandmother Rita. I always loved listening to her stories when we were growing up and she and "Pop" would come to visit. She had such a great sense of humor and she was such a kind and caring person. May she rest in peace and may your memories of her comfort you in the Times to come. Geoff and Diane Vecellio Sprague.
Geoff and Diane Vecellio Sprague - Saturday October 06, 2018 via Condolence Message
Share This:
1
Page 1 of 1
Share
×