To share your memory on the wall of Richard Wells, sign in using one of the following options:

After graduation in June of 1949, Dick joined his father in the wool business creating the Richard W. Wells Co in Philadelphia, serving all the woolen and worsted mills in the United States. In 1967, he and his family moved to Sudbury, MA in order to open another office in Boston. He became president of the Boston Wool Trade Association from 1986 to 1990.

Always grateful for his time at Williams, Dick was active in alumni efforts. He served as president of the Philadelphia Alumni Association and was co-chairman of a committee for prospective Williams students in both Philadelphia and Boston. He served on the Society of Alumni from 1974 to 1977 and was class agent for the class of ’49 for 14 years. He was presented with the Copeland Award in 1982.

After retiring, Dick spent his winters as a member of the Indian River Club in Vero Beach, FL where he was able to indulge his lifelong passion of playing golf. By his own count, recorded in a small black notebook, he played at 509 different courses. The pinnacle came when he was able to play at Augusta National Golf Club with 3 close friends complete with a stay in the Eisenhower cabin. He was always proud to announce that he had ‘shot his age’ and avidly played until 2015. But golf was more than a game for Dick; it was a way to bring people together. He was very pleased to establish an annual golf outing at various courses in Vero Beach pairing local Williams alumni with members of the Williams College golf team on their spring trip.

He was a member of the First Presbyterian Church of Vero Beach.

FUNERAL NOTICE: Services for Richard Wells will be at a later date. In lieu of flowers, donations may be made to Straight Ahead Ministries, 791 Main Street, Worcester, MA 01610 or the Homeless Family Center Inc., 720 4th Street, Vero Beach, FL 32962.

To add to the Book of Memories please visit www.flynndagnolifuneralhomes.com.
Read Less

To send flowers to the family or plant a tree in memory of Richard W. Wells Jr., please visit our Heartfelt Sympathies Store.

We encourage you to share your most beloved memories of Richard here, so that the family and other loved ones can always see it. You can upload cherished photographs, or share your favorite stories, and can even comment on those shared by others.

Posted Dec 31, 2018 at 10:28am
Dear Wells Family,
Marty and I were saddened deeply when we read Mr. Wells’s obituary in The Globe. He was a truly kind gentleman. We loved seeing him at the Alumni Golf Tournament each year. He was a treasured friend of my dad’s. I have wonderful memories of the two of them laughing together on the terrace at Taconic after a round of golf.
You have our deepest sympathy.
With love,
Patty Doggett
Comment Share
Share via:
KC

Posted Dec 12, 2018 at 04:20pm
Hi Ann and family,
Please accept our sincere condolences. Kim had always enjoyed talking and playing golf with Dick. Dick loved his grandchildren and he and Kim enjoyed talking about their progress.
Dick labeled my foursome as the dew sweepers and how right he was!
Dick truly was a gentleman, a very interested person as well as a caring , special individual. He will be missed.
Our thoughts and prayers are with you and your family.

Posted Dec 12, 2018 at 01:14pm
Dear Wells Family, my deepest sympathy on the loss of your father. My thoughts and prayers are with you during this difficult time.
Comment Share
Share via:
SS

Posted Dec 12, 2018 at 08:44am
Dear Ann,
Please know Bill and I are thinking about you and sending prayers and concerns for your loss of Dick. We have missed seeing you sitting behind us iat First Presbyterian in Vero.
Love,
Susie and Bill
Comment Share
Share via: 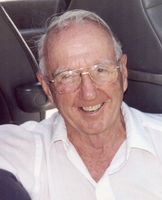