To share your memory on the wall of Peter Esposito, sign in using one of the following options:

FUNERAL NOTICE: A Liturgy of Christian Burial for Peter Esposito will be celebrated Saturday February 23, 2019 at 10:00 AM at St. Elizabeth of Hungary Church. Burial will follow in Westlawn Cemetery in Williamstown. Calling hours at FLYNN & DAGNOLI-MONTAGNA HOME FOR FUNERALS WEST CHAPELS, 521 West Main St. North Adams, MA are Friday from 4-7 PM. Memorial donations may be made to the charity of the donor's choice in care of the funeral home. To add to the Book of Memories, please visit www.flynndagnolifuneralhomes.com.
Read Less

To send flowers to the family or plant a tree in memory of Peter Francis Esposito, please visit our Heartfelt Sympathies Store.
Print

We encourage you to share your most beloved memories of Peter here, so that the family and other loved ones can always see it. You can upload cherished photographs, or share your favorite stories, and can even comment on those shared by others.

Family Albareda Marco, Italy., Robert C. Sprague III and the entire Sprague famil, and other have sent flowers to the family of Peter Francis Esposito.
Show you care by sending flowers

Posted Feb 22, 2019 at 08:10am
We have a beautiful memory of you and we are sure that you will now fly into the highest skies, where Our Lord has already welcomed you.

Posted Feb 21, 2019 at 09:57pm
So sorry to hear of Pete's passing. My heartfelt sympathy to Mimi Paul and Peter. He was such a great guy Love and prayers to all.
Comment Share
Share via:
EK

Posted Feb 21, 2019 at 07:28pm
Some of my fondest memories of Pete go back into the mid 79's when we corp fliers of the "Golden Triangle" would routinely gather at LGA at the old Butler FBO. .
Pete would constantly complain about all the new FAR's
Well Pete you finally left "The surly bonds of Earth" 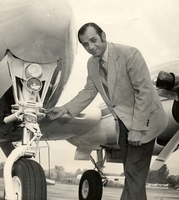