To share your memory on the wall of Janet Winn, sign in using one of the following options:

FUNERAL NOTICE: A Liturgy of Christian Burial for Janet Winn will be celebrated on Tuesday, March 5, 2019 at 11:00 AM at Sts. Patrick and Raphael Church, Williamstown, MA. Burial will be in the spring at Oak Hill Cemetery. Calling hours will be on Tuesday from 9:00 AM-10:30 AM at the Flynn & Dagnoli Funeral Home – WEST Chapel 521 West Main St. North Adams, MA 01247. Donations may be made to Hospice Care in the Berkshires through the funeral home. To add to the Book of Memories, please visit www.flynndagnolifuneralhomes.com.
Read Less

To send flowers to the family or plant a tree in memory of Janet Carey Winn, please visit our Heartfelt Sympathies Store.

We encourage you to share your most beloved memories of Janet here, so that the family and other loved ones can always see it. You can upload cherished photographs, or share your favorite stories, and can even comment on those shared by others.

I am just now learning about Janet's death. I feel grateful that I was able to speak to her the latter part of last year when I was trying to reach Peter at her home.
I will be in touch with him now to express my sympathies and reminisce about your dear mother, grandmother and great-grandmother.
Such a wonderful life, a life well-lived!
Kevin (Matthews) 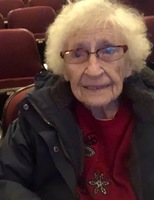