To share your memory on the wall of Theresa Pill, sign in using one of the following options:

Provide comfort for the family of Theresa Pill with a meaningful gesture of sympathy.

Funeral Notice:
Funeral services will be held on Monday, April 22, 2019 at Knesset Israel, 16 Colt Rd. at 1PM, Pittsfield MA with burial to take place at the Knesset Israel Cemetery, 484 Pecks Rd., Pittsfield. A meal of consolation will follow the burial back at the synagogue.
Due to the Passover holiday, instead of the traditional shiva, the family will be receiving condolences after the 7:00 PM minyan on Tuesday, April 23rd, 2019 at Knesset Israel synagogue, 16 Colt Rd., Pittsfield MA 01201.
In lieu of flowers, donations may be made to the KI Cemetery Gate fund in care of Flynn-Dagnoli-Bencivenga Funeral Home, 5 Elm St., Pittsfield MA 01201. To add to the Book of Memories, please visit www.flynndagnolifuneralhomes.com.
Read Less

We encourage you to share your most beloved memories of Theresa here, so that the family and other loved ones can always see it. You can upload cherished photographs, or share your favorite stories, and can even comment on those shared by others.

Posted Apr 21, 2019 at 08:06pm
Dave, Steve and I would like to extend our deepest sympathies to you and your family...your Mom was an incredible woman who was so proud of her family...she was an inspiration to whoever came in contact with her...sending thoughts and prayers...
Katie and Steve Wiater
Comment Share
Share via:
SZ

Posted Apr 21, 2019 at 12:20pm
My husband David and I sat in back of Theresa in shul for many years. We looked forward to seeing her beautiful suits, impeccable hair, and of course the glorious bling. We were from the Bronx as well and loved talking to Theresa about our days in the Bronx. She will be missed. All my love to the family.
Comment Share
Share via:
TM

I only knew your mother from the nursing home where David and I would cross paths quite often. I was so sad and shocked to hear that she had passed. She was a delightful woman and I enjoyed having conversations with her whenever I saw her. My deepest sympathy to you David and your family.

Posted Apr 19, 2019 at 05:30pm
Shari and David,
You and your family are in my thoughts and prayers. It's a privilege to have been able to get to know your mom. She was a wonderful woman and she will be missed. I'll never forget the trip we took to England and the many laughs we shared. My condolences. Diane.
Comment Share
Share via: 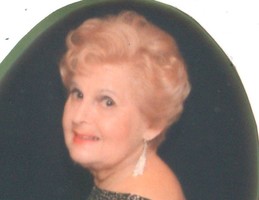