To share your memory on the wall of Louis Silverman, sign in using one of the following options:

Provide comfort for the family of Louis Silverman with a meaningful gesture of sympathy.

Louis was last employed by Pittsfield Supply Co. in Pittsfield, MA where he worked for 30 years until his retirement in 1982. He enjoyed playing golf.

Survivors include his son, Mark P. Silverman of Westwood, MA; two nieces - Bernice Goldman of Acton, MA and Celia Goldman of Hartford, CT; nephew Gerald Goldman of Kingston, NY; and “niece” Kathy Grandshaw of Apex, NC; as well as several grandnieces and grandnephews. He was predeceased by seven brothers and sisters.

FUNERAL NOTICE: In honor of Louis’s wishes, there will be no calling hours or services. 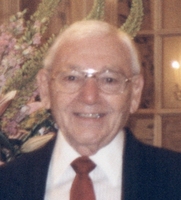