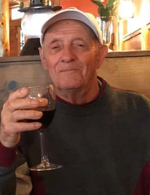 Richard Francis "Dickie" Nichols, 87, of Williamstown died Saturday August 17, 2019 at Berkshire Medical Center in Pittsfield. He was born in Ellenburg, NY on December 19, 1931 a son of the late Oliver and Hazel (Arno) Nichols. Dickie attended local schools and was a self employed drywall finisher serving Berkshire County for several years. He was a communicant of St's Patrick and Raphael Parish in Williamstown. Dickie was an avid golfer and was a longest standing member and oldest member of the Waubeeka Golf Course in Williamstown where the Wednesday night league was named Dick Nichols League in his honor. He was a long time fan of the Boston Red Sox, New England Patriots and Boston Celtics. Survivors include his wife Linda (Archambeau) Nichols whom he married on September 11, 1988 on the first hole at Waubeeka Golf Course. Four daughters Marie Nichols LaCasse and her husband Jim of Essex, VT.; Bonnie Nichols Dydowicz of North Adams, Lisa Olson and her former husband, Kyle Black of Williamstown and Leann Olson O'Brien and her husband Bill of Adams. A sister Carolyn Brown of Bennington, VT., a brother Len Nichols of Bennington, VT. Dickie was "Poppy" to 12 grandchildren and 18 great grandchildren. He was predeceased by his first wife Joyce Bernard Nichols who passed in 1983 and five siblings.
The Nichols family would like to thank the caring and skilled members of the 4th floor Telemetry Unit, fifth floor staff as well as the Critical Care Unit at BMC for their support and excellent care.
A Liturgy of Christian Burial for Richard "Dickie" Nichols will be celebrated Thursday August 22, 2019 at 11 AM at St's Patrick and Raphael Church in Williamstown. Burial will take place at a later date in the family plot in the Hancock Cemetery. A calling hour will take place from 10AM to 11AM on Thursday at the church. Memorial donations are suggested for the Shriner's Children Hospital or to the Northern Berkshire Ambulance Service through the Flynn & Dagnoli Funeral Home, WEST CHAPELS, 521 West Main St. North Adams, MA .01247. To add to the Book of Memories, please visit www.flynndagnolifuneralhomes.com.