To share your memory on the wall of David LaValley, sign in using one of the following options:

FUNERAL NOTICE: The funeral for David LaValley will be Saturday November 23, 2019 at 10:00 AM at FLYNN & DAGNOLI-MONTAGNA HOME FOR FUNERALS CENTRAL CHAPEL, 74 Marshall St. North Adams. Burial will follow in Southview cemetery. Calling hours will be Saturday morning from 8-10 AM. Memorial donations may be made to Second Chance Animal Shelter in care of the funeral home. To add to the Book of Memories, please visit www.flynndagnolifuneralhomes.com.
Read Less

To send flowers to the family or plant a tree in memory of David Anthony LaValley, please visit our Heartfelt Sympathies Store. 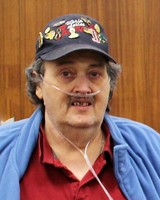