To share your memory on the wall of Terrence Flynn, sign in using one of the following options:

Provide comfort for the family of Terrence Flynn with a meaningful gesture of sympathy.

He was born in Gary, Indiana, on Sept. 13, 1934, the son of the late James Woodrow Flynn and Anita June (... Read More
Terrence “Terry” John Flynn, a longtime resident of Northern Berkshire County, died Dec. 23 at Williamstown Commons. He was 85.

He was born in Gary, Indiana, on Sept. 13, 1934, the son of the late James Woodrow Flynn and Anita June (Tuttle) Flynn. He attended St. Luke Elementary School and Emerson High School in Gary. He received a bachelor of science degree in humanities with a major in English from Loyola University Chicago. It was there he met his future wife, Kathleen Ann Madigan, when they acted together in a production of “Antigone.”

The two married at Holy Name Cathedral in Chicago on Sept. 8, 1956.

Flynn served in the U.S. Army with the 28th Infantry Regiment of the 8th Division in Heilbronn, Germany, from 1956-58. He was joined in Germany by his new bride, and the two lived in the garret of a quaint house. They visited Paris and points around Germany and saw great German stage and operatic productions and American movies dubbed in German.

Afterward, Flynn and his wife lived in Chiago where they had their first child, then moved to Gary where Flynn worked in U.S. Steel’s Gary Works for 11 years. He worked in the mill’s Industrial Engineering Department and as a foreman in the Axle Mill and a division engineer in the West Mills Finishing and Shipping Department.

The Flynns had four more children while in Gary.

In 1970, the family moved to Williamstown, Mass., and later to North Adams. Flynn was taken with the beauty of the Berkshires and enjoyed hiking with his children, who numbered six as of 1975.

After settling in Massachusetts, Flynn decided to pursue a teaching career and earned a master’s degree in education with a concentration in literature from what is now Massachusetts College of Liberal Arts.

He became an English and history teacher at McCann Technical School where he taught the region’s future electricians, plumbers and car mechanics to appreciate Emily Dickinson, American history and theater. During his years at McCann, from 1972 until he retired in 2000, Flynn served as faculty adviser to the school’s National Honor Society and traveled with students each year to New York or Boston.

He also created a drama program and produced several plays, including one that used students from Massachusetts College of Liberal Arts as directors.

Flynn believed the reading and acting of Shakespeare’s plays to be a crucial part of one’s literary education and produced major Shakespeare dramas under the direction of Shakespeare & Co. of Lenox, Mass.

He was a recipient of the George Olmsted Jr. Class of 1924 Prize for Excellence in Secondary School Teaching awarded by Williams College.

In his later years, Flynn lived with his wife at the Berkshire Mill apartments in Adams, and he enjoyed teaching his grandchildren about the history of the former textile mill that he resided in.

In addition to his parents, Flynn was preceded in death by his sister Anne Flynn, his brother James W. Flynn and his son-in-law Arthur Sullivan.

FUNERAL NOTICE: A Liturgy of Christian Burial for Terry Flynn will be celebrated Friday December 27, 2019 at 11:00 AM at St. Elizabeth of Hungary Church. Burial will be at a later date in Southview Cemetery. Calling hours at FLYNN & DAGNOLI-MONTAGNA HOME FOR FUNERALS CENTRAL CHAPELS, 74 Marshall St. North Adams, MA are Thursday from 4-7 PM. Flowers may be sent. To add to the Book of Memories, please visit www.flynndagnolifuneralhomes.com.
Read Less

To send flowers to the family or plant a tree in memory of Terrence John "Terry" Flynn, please visit our Heartfelt Sympathies Store.

We encourage you to share your most beloved memories of Terrence here, so that the family and other loved ones can always see it. You can upload cherished photographs, or share your favorite stories, and can even comment on those shared by others.

Michael Madigan Family, Peggy McCarthy-Leeney and Mary and Keith Ross, and others have sent flowers to the family of Terrence John "Terry" Flynn.
Show you care by sending flowers

Posted Dec 30, 2019 at 03:16pm
Without Mr. Flynn, I might not have gone to college, and I certainly wouldn't be the same person I am today. In 1994, Mr. Flynn strongly encouraged me to try out for Macbeth, which was being directed at McCann Tech for the first time by Shakespeare & Company. After some arm twisting, I tried out and somehow ended up with the lead part. I really loved acting and went on to do several more plays at McCann, and did some intern-type work with Shakespeare & Company as well. Mr. Flynn's daughter, Deirdre, also directed me in a play that year. I think this was pretty much my ticket to college. Mr. Flynn even wrote me a great recommendation, that was probably a little more glowing than I actually deserved. I continued acting for another year or two before switching to architecture, but I credit Mr. Flynn and Shakespeare & Company with getting me excited about further learning and really putting me in gear for it. I'm not really sure what I would have done otherwise.

I was so sorry to hear about his passing, and I wish I could be there for the services. But I hope his family knows what a profound effect he had on me, and probably many others as well.
Comment Share
Share via:
ED

Dear David, Thank you for sharing this inspiring message about our dad. I cannot tell you what a gift this is to all of us. Dad spoke very highly of you and admired your skill and passion. My mother, my sister Deirdre and I remember going to see Macbeth at McCann. It was a terrific production. Thank you again for your beautiful words. They are a treasure. -Eileen
RF

Richard and Marge Molumby and Children and their families

The FTD Vibrant Sympathy Planter was purchased and planted a memorial tree for the family of Terrence Flynn. Send Flowers

Peggy McCarthy-Leeney and Mary and Keith Ross purchased the The FTD Comfort Planter for the family of Terrence Flynn. Send Flowers 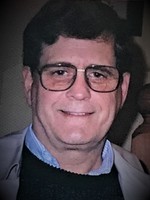