To share your memory on the wall of Donald Racette, sign in using one of the following options:

FUNERAL NOTICE: A Graveside Service for Donald Racette will be held on Wednesday January 15, 2020 at 12 Noon in Southview cemetery in North Adams. There are no calling hours. Memorial donations may be made to the North Adams Ambulance Service in care of FLYNN & DAGNOLI-MONTAGNA HOME FOR FUNERALS, CENTRAL CHAPEL, 74 Marshall St. North Adams, MA 01247. To add to the Book of Memories, please visit www.flynndagnolifuneralhomes.com.
Read Less

We encourage you to share your most beloved memories of Donald here, so that the family and other loved ones can always see it. You can upload cherished photographs, or share your favorite stories, and can even comment on those shared by others.

Posted Jan 13, 2020 at 11:13am
Dear Dot, Danny, Deb and Bev,
I am so very sorry to learn of Don's passing, and I wish I could be there on Wednesday. Please know that you are all in my prayers. I have such special memories over the years as Dot and Don are my Godparents and, of course, he and my Dad were close like brothers. Our families will always share a special bond. May the peace of our Lord surround and strengthen each of you at this difficult time.
Love,
Linda (LeClair) Hoglund
Comment Share
Share via:
CS

My deepest sympathy for the loss of your a Father

May he Rest In Peace 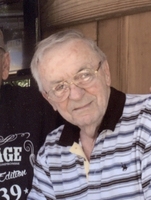