To share your memory on the wall of Bernard Gomeau, sign in using one of the following options:

Provide comfort for the family of Bernard Gomeau with a meaningful gesture of sympathy.

Posted Jan 17, 2020 at 12:10pm
BJ and Family- We were so sorry to hear of your loss. Know that are thoughts and prayers are with you all. Peace and courage to you -

Flowers were purchased for the family of Bernard Gomeau. Send Flowers

The FTD Living Spirit Dishgarden was purchased for the family of Bernard Gomeau. Send Flowers

Flowers were purchased for the family of Bernard Gomeau. Send Flowers

Flowers were purchased and a memorial tree planted for the family of Bernard Gomeau. Send Flowers

Posted Jan 16, 2020 at 05:57pm
Please accept our most heartfelt sympathies for your loss... Our thoughts are with you and your family during this difficult time. 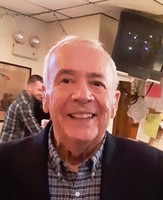