To share your memory on the wall of Edna Cooper, sign in using one of the following options:

Provide comfort for the family of Edna Cooper with a meaningful gesture of sympathy.

FUNERAL NOTICE: The funeral for Edna Cooper will be Saturday February 1, 2020 at 2:00 PM at FLYNN & DAGNOLI-MONTAGNA HOME FOR FUNERALS WEST CHAPELS, 521 West Main St. North Adams, MA. Burial will be in the spring in Clarksburg Cemetery. Calling hours at the funeral home are Saturday from 11-2 PM. Memorial donations may be made to the charity of the donor's choice in care of the funeral home. To add to the Book of Memories, please visit www.flynndagnolifuneralhomes.com.
Read Less

To send flowers in memory of Edna May Cooper (Tatro), please visit our Heartfelt Sympathies Store.

We encourage you to share your most beloved memories of Edna here, so that the family and other loved ones can always see it. You can upload cherished photographs, or share your favorite stories, and can even comment on those shared by others.

Your Safelite Family sent flowers to the family of Edna May Cooper (Tatro).
Show you care by sending flowers

Your Safelite Family purchased flowers for the family of Edna Cooper. Send Flowers

Flowers were purchased for the family of Edna Cooper. Send Flowers

My prayers and comfort go out to y’all during this time of mourning and sorrow and asking The Lord God to send his peace and comfort be with each of you. In Jesus name. Amen. 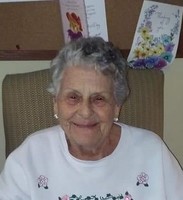