To share your memory on the wall of Robert Kove, sign in using one of the following options:

Provide comfort for the family of Robert Kove with a meaningful gesture of sympathy.

Posted Feb 06, 2020 at 07:58pm
Dear Mrs. Kove and family,
Our deepest sympathy on Bob's passing. We have truly missed you both as neighbors since you left Clarksburg. You and Bob were our daughter Danielle's favorite teachers. Our thoughts and prayers are with you during this difficult time.
Comment Share
Share via:
DP

Posted Feb 06, 2020 at 09:03am
Dear Mrs.Kove and family,
I was saddened to hear of Mr. Kove’s passing. I was lucky to have him as my home room teacher for all of my four years at Drury. I really enjoyed my time there . He was a great teacher and a wonderful person. I’ve missed our little chats at Big Y as well. May you find peace and comfort in knowing he touched so many lives. I will miss him, and always remember him with a smile. He was the best. Deborah (Campbell) Peirce.
Comment Share
Share via:
HD

Posted Feb 04, 2020 at 04:43am
Mr. Kove rescued me in Algebra II with his kind heart and his teaching strategies that nurtured confidence. I also had him for German class where even when you didn’t know an answer he taught us to say it in German! A kind and compassionate educator. My thoughts are with you...he was a very special man.
Comment Share
Share via:
BS

Posted Feb 03, 2020 at 10:04am
Bob was one of my favorite colleagues at Drury. He was always upbeat and was a great role model for his students--who included my wife, who became a teacher, in part, because of the positive influence of he and hide wife.
Bob Scrivens
Comment Share
Share via:
CH

Posted Feb 03, 2020 at 08:15am
I had Mr Kove my senior year for Trig. I had an awful time with Trig. He was so patient and helped me through it. This was in 1970 and I was the only girl in the class! We were in the temp trailers at the old Drury. He was a good man and a great teacher!
Comment Share
Share via: 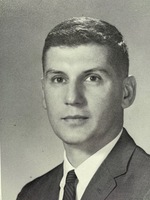