To share your memory on the wall of John Brooks, sign in using one of the following options:

To send flowers to the family or plant a tree in memory of John George "Jack" Brooks, please visit our Heartfelt Sympathies Store.

Posted Feb 09, 2020 at 09:36am
Dear Joyce, I just heard of the passing of J ack. I am so sorry for your loss. We will all miss him, such a wonderful man. My deepest sympathy. Elizabeth Ralston
Comment Share
Share via: 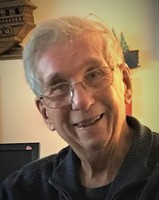