To share your memory on the wall of Elizabeth Hannock, sign in using one of the following options:

FUNERAL NOTICE: A celebration of Liz’s life will take place at a later date. The FLYNN & DAGNOLI FUNERAL HOME, 74 Marshall St., North Adams, MA 01247 is in charge of arrangements. In lieu of flowers, donations in Liz's memory can be made to Pine Cobble School in Williamstown Massachusetts.To add to the Book of Memories, please visit www.flynndagnolifuneralhomes.com.
Read Less

To send flowers to the family or plant a tree in memory of Elizabeth Willard Hannock, please visit our Heartfelt Sympathies Store.

There are no events scheduled. You can still show your support by sending flowers directly to the family, or planting a memorial tree in memory of Elizabeth Willard Hannock.
Visit the Heartfelt Sympathies Store

We encourage you to share your most beloved memories of Elizabeth here, so that the family and other loved ones can always see it. You can upload cherished photographs, or share your favorite stories, and can even comment on those shared by others.

Posted May 19, 2020 at 11:40pm
The Akers family sends their sympathy at hearing of the loss of Liz who was a lovely warm smiling spirit in the halls of Sweetwood and a friend to our father John and Ollie the cat just down the hall. I remember when Liz led me into her apartment to see the wonderful photos she had taken and then jumped on her mini trampoline with the agility and energy of an adolescent! She was an elegant and youthful presence with no signs of her ninety plus years in her bones or heart! We will miss her and will be thinking of her son and granddaughter both of whom she quietly boasted with good reason. We were glad to have known her for a short while. Susan and John Akers
Comment Share
Share via:
BR

Posted May 16, 2020 at 10:10pm
I worked at Home Savings Bank directly for Mr Hammock and Mrs. Hannock was truly a member of our bank family. She would take photos at our events and was always there to support us. When I attended the memorial for Mr Hannock she had a table full of his ties and asked us to take one. It sits in a table behind my sofa and I thought at the time it was a wonderful gesture.bI remember too how much she did for him when he was ill. She truly was a role model to so many.
Comment Share
Share via: 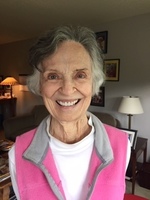