To share your memory on the wall of James Hayes, sign in using one of the following options:

To send flowers to the family or plant a tree in memory of James E. Hayes, please visit our Heartfelt Sympathies Store.

We encourage you to share your most beloved memories of James here, so that the family and other loved ones can always see it. You can upload cherished photographs, or share your favorite stories, and can even comment on those shared by others.

Posted Aug 01, 2020 at 08:46am
My uncle Jimmy was always larger than life when he came to visit us in Charlestown. My mom would get so excited to see him as he drove up on his motorcycle. I loved visiting with him and aunt Carole and the boys because they lived so far away from us. Then life spread us all apart and we grew up to have families of our own. Reading his story of pride from his son Glen I see so many traits of myself and I just wanted to say Thank you uncle Jimmy now I have some answers and for always being larger than life. Mostly I wanted to say thank you for holding my mom's hand when she went home, as I know she did for you , with aunt Madeleine, Uncle Billy and Brendan and Aunt Sue picking up the rear lol. You will be missed by many even if you didn't talk to them everyday, your presence was. Love you and rest in peace. Love your neice Mary Ellen
Comment Share
Share via: 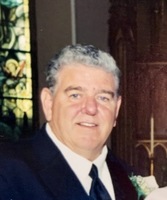