To share your memory on the wall of Thomas Moore, sign in using one of the following options:

To send flowers to the family or plant a tree in memory of Thomas Joseph Moore, please visit our Heartfelt Sympathies Store.

Posted Oct 10, 2020 at 12:17pm
It was with great sadness that I received the news of the passing of Tom.
My family and I have known and enjoyed Tom's banter and friendship for over 18 years. Tom was such a big part of our core dealers and landscape, with both the familiar site of his heavy Blue Van arriving "loaded for Bear", to him pulling out 7 days later, gunning his engine heading Home westbound on Rt 20, with one last honk of his horn and Wave!
In the Antique world, Tom was known as " The Seeker" , an appropriate term for all of the efforts involved when pursuing discovery. Tom made many friends in the business from all over the country, and was respected by all his peers.
I was fortunate to share many good conversations with Tom, mostly about his beloved Family and Town.
Our condolence to his Family, he was very proud of you.
Sincerely,
Joe and Suzanne Collins and Family
Collins AppleBarn Antique Shows
Brimfield, MA
Comment Share
Share via:
P

Posted Sep 14, 2020 at 05:27pm
My sincere condolences to the family of Tommy Moore. I knew Tommy from high school and he always had a smile on his face. Tommy was kind and very caring. May he rest in peace . Patricia Kelly
Comment Share
Share via: 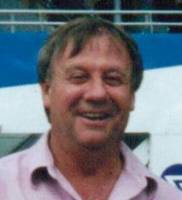