To share your memory on the wall of Keegan Perry, sign in using one of the following options:

To send flowers to the family or plant a tree in memory of Keegan Carl Perry, please visit our Heartfelt Sympathies Store.

We encourage you to share your most beloved memories of Keegan here, so that the family and other loved ones can always see it. You can upload cherished photographs, or share your favorite stories, and can even comment on those shared by others.

Posted Oct 05, 2020 at 09:45pm
Dear Perry and McLain Families, no words can express the sorrow everyone is feeling for your tremendous loss. Please know that Keegan will forever live in our hearts. He will be missed.
Comment Share
Share via:
DF

Posted Oct 03, 2020 at 08:35am
To Becky and the McLain and Perry Family,
I'm so sorry for your loss know that our family is thinking of you at this difficult time.

Ernie and Rebecca, Carl and Rhoda: Our heart goes out to you and yours on your unfortunate loss. Please know that our hearts and prayers are with you and yours at this difficult time . Prayers always, Lou E Lescarbeau and Shirley Lescarbeau 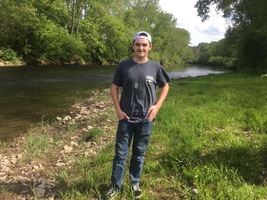