To share your memory on the wall of Daryl Roy, sign in using one of the following options:

Print
Daryl Lee Roy, 73, of Clarksburg, MA, died on October 18, 2020, at the Vermont Veterans Home in Bennington after a long battle with ALS (Lou Gehrig’s disease).

Daryl was born in North Adams, MA, the son of Lionel and Ethel “Pat” (... Read More
Daryl Lee Roy, 73, of Clarksburg, MA, died on October 18, 2020, at the Vermont Veterans Home in Bennington after a long battle with ALS (Lou Gehrig’s disease).

Daryl was a US Army veteran and also served in the Vermont National Guard.

Daryl was the owner and operator of Berkshire Valley Auto Works (NAPA) in North Adams and NAPA of Wilmington, VT. Prior to that, he was in General Electric Company’s Manufacturing Management Program as a Project Manager for the Navy’s nuclear submarine program. He had also been a police officer in North Adams and Clarksburg, Chairman of the Clarksburg Selectmen, and served on many town and bank boards and committees.

In his youth, Daryl was an Eagle Scout and later became an accomplished skier, golfer, fisherman, scuba diver, hunter and marksman. He was an avid boating enthusiast, making many trips each summer with his family to fish on Lake Ontario and to explore the Thousand Islands on his beloved motorboat, “Babbette.” He obtained his Marine Captain’s License and was also a Merchant Marine qualified to commandeer freighters up to ten tons.

Daryl was a member of the Night Cruzers, holding yearly Cruise Night events at the North Adams NAPA store to raise funds for local charities. He was a master at reconditioning engines, including high-performance engines, and restoring classic trucks and cars. He received many National awards for his professional accomplishments and dedication to the automotive industry.

He was a communicant of St. Elizabeth of Hungary Church.

Daryl is survived by his wife, Mireille “Mimi” (Couture) Roy and his daughter, Danielle Monique Roy, her husband, Todd Keetch, and his grandson, Landon Keetch, of Belgrade, MT; a sister-in-law, Simone Susan Couture; a brother-in-law, Claude Couture; a niece, Kimberly Couture; a grand-nephew, Michael Gratton; an uncle, Rolland Roy; and many cousins in this area and across the country.

FUNERAL NOTICE: A Liturgy of Christian Burial for Daryl Roy will be celebrated Saturday October 24, 2020 at 10:00 AM at St. Elizabeth of Hungary Church. Burial will follow in Southview Cemetery. Calling hours at FLYNN & DAGNOLI-MONTAGNA HOME FOR FUNERALS, WEST CHAPEL, 521 West Main St. North Adams, MA will be Friday from 4-7 PM. Memorial donations may be made to St. Peter’s ALS Center, 19 Warehouse Row Albany, NY 12205 or donations online at: www.givetostpeters.org/donate. Under “Designation” choose “St. Peter’s ALS Regional Center.” or by calling the ALS Center at 518-525-1629
or in care of the funeral home. To add to the Book of Memories please visit www.flynndagnolifuneralhomes.com.
Read Less

To send flowers to the family or plant a tree in memory of Daryl Lee Roy, please visit our Heartfelt Sympathies Store.

We encourage you to share your most beloved memories of Daryl here, so that the family and other loved ones can always see it. You can upload cherished photographs, or share your favorite stories, and can even comment on those shared by others.

Posted Oct 20, 2020 at 11:17pm
I am very sorry to hear of Daryl's passing. I want to express my Sincere Condolences to His Family, Daryl was a great friend and I am Honored to have known him. He will be fondly missed. Rest in Peace Daryl.
Comment Share
Share via:
RT

Posted Oct 19, 2020 at 09:57pm
Many great memories of joy and laughter over the years with Daryl ,Mimi, and Danielle .Chocolate covered strawberries, champagne and The 4 Seasons aboard the Babette.
Calm seas our friend.

Flowers were purchased and a memorial tree planted for the family of Daryl Roy. Send Flowers 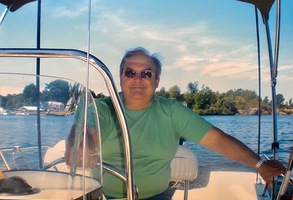