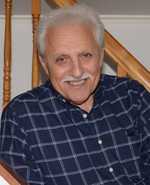 Longtime Businessman and Barber, George Louis Ferris, 82, of North Adams, MA died on October 30, 2020 as a result of an automobile accident. He was born in North Adams, MA on July 15, 1938, a son of the late Louis George and Nellie Mary (Simon) Ferris. He attended schools in North Adams and graduated from Drury High School. He was a veteran of the US Army National Guard. A longtime barber George started his career with his father at the former Ferris Barber Shop and later joined with his brothers to own and operate the Man’s World Styling Salon in North Adams.
Mr. Ferris was a communicant of St. Elizabeth Church in North Adams. He was a member of the Lebanese American Social Club and was a former lector at Our Lady of Incarnation Church.
Survivors include his wife, Cecile (Serre) Ferris, a daughter, Jenny Moulton and her husband, John of North Adams as well as two sons, Craig Ferris and his wife, Elizabeth of Clarksburg and John Baran of North Adams. He also leaves eight grandchildren, Jenna, Jeffrey, Joseph and Jacqueline Moulton, Jesse, Destiny and Trinity Baran and Luke Ferris and two great grandchildren, Addy and Pasley. He leaves his brothers, Ronald J. Ferris and his wife, Judith of North Adams and Robert D. Ferris and his wife, Brendalee of Clarksburg and two sisters, Madelyn Shanahan of Great Barrington and Lorraine Brown of North Adams and many nieces, nephews and cousins.
FUNERAL NOTICE: A Liturgy of Christian Burial for George Louis Ferris will be held at 11:30a.m. on Saturday, November 7, 2020 at the St. Elizabeth of Hungary Church in North Adams. Calling hours will be held at the church from 9a.m. until the time of the Mass. Memorial donations may be made to the St. Jude’s Children’s Hospital in Care of Flynn and Dagnoli Funeral Home, 74 Marshall Street, North Adams, MA 01247. To add to the Book of Memories, please visit www.flynndagnolifuneralhomes.com.