To share your memory on the wall of Francis Merrigan, sign in using one of the following options:

Francis “Frank” Merrigan, 95, died at home, surrounded by family, on November 2nd. He lived a long and happy life and will be lovingly remembered by family and friends for his integrity, intel... Read More
Francis C. Merrigan, 95, of North Adams

Francis “Frank” Merrigan, 95, died at home, surrounded by family, on November 2nd. He lived a long and happy life and will be lovingly remembered by family and friends for his integrity, intelligence, and joyfulness as well as his unusually strong handshake, charm, and ability to crack himself up.

Frank--better known to many as Mr. Merrigan--was a proud, lifelong resident of North Adams. The oldest child of Francis and Maude Merrigan, he earned a Bachelors degree from St. Michael’s College and a Masters in English from MCLA. Frank served as a U.S. Army Sergeant in World War II and the Korean War and was proud to be a veteran.

A career English teacher, Frank taught in Hillsdale, NY, and Great Barrington before a lengthy and legendary tenure at Drury High School. While he left a lasting impression on generations of students, Frank’s greatest impact as an educator might have been as the first president of the North Adams Teachers’ Association, where he played a key role in crafting the North Adams Public Schools teacher contract that is still used today.

Frank had a very long and productive retirement. He produced dozens of beautiful oil, pastel, and watercolor landscapes. He published poems in the Berkshire Review and Upstreet and frequently performed his written work at local literary events.

Throughout his life, Frank enjoyed nature, most especially fishing and canoeing. Although he possessed a formidable intellect, he was happiest in simple, quiet moments. He once said, describing his ideal vacation, to just give him “a nice log to sit on and a little chipmunk to talk to”. He loved frequenting local coffee and ice cream shops, smoking his pipe, L.L. Bean, driving his Jeep, being in the woods, listening to the weather radio, military and presidential history, playing Scrabble, gardening, and--famously--vanilla ice cream.

Though Frank had many joys in life, there was none greater for him than being a father. He described his three daughters--Kate, Erin, and Meghan--as his “three best friends”.

In addition to his daughters he is survived by his sons-in-laws Nicholas Fahey, Evan Webb, and Mark Charland; grandchildren Walker and Oisín; former wife Marcia Ray; Otto “poochie” the dog; and many nieces, nephews, grandnieces, grandnephews and friends, all of whom he loved dearly. In addition to his parents he is predeceased by his brothers, John and Michael Merrigan, sister Mary Gloster, nephew Tim Gloster, and his first-born grandson, Griffin Francis Charland. His daughter Erin and her partner Evan played a special role in providing loving care for Frank at the end of his life, for which the entire family is forever grateful.

FUNERAL NOTICE: A Liturgy of Christian Burial for Francis Clement Merrigan will be held at 11:00am on Monday, November 9th, 2020 at the St. Elizabeth of Hungary Church in North Adams, MA. Calling hours will be held at 2pm-5pm on Sunday, November 8th at the Flynn and Dagnoli West Chapel, 521 West Main Street, North Adams. Due to the ongoing COVID-19 health protocols, all who plan to attend are required to wear masks and maintain safe distancing. Bringing your own hand sanitizer is recommended.. The family would like to note that they understand if anyone chooses not to attend services due to COVID-19. The funeral mass will be broadcast live on the Flynn & Dagnoli Facebook page for people unable to attend in person. Please visit Facebook and "Like" the page. Memorial donations may be made to North Adams Public Schools in care of Flynn and Dagnoli Funeral Home, 74 Marshall Street, North Adams, MA 01247. To add to the Book of Memories, please visit www.flynndagnolifuneralhomes.com.
Read Less

To send flowers to the family or plant a tree in memory of Francis C. "Frank" Merrigan, please visit our Heartfelt Sympathies Store.

We encourage you to share your most beloved memories of Francis here, so that the family and other loved ones can always see it. You can upload cherished photographs, or share your favorite stories, and can even comment on those shared by others.

Flowers were purchased for the family of Francis Merrigan. Send Flowers

Posted Nov 07, 2020 at 07:01pm
Kate, Erin, Meghan and family, you are in our hearts and our prayers. What an incredible life he had! Salamonz. Much love, John David and Louise

Posted Nov 05, 2020 at 04:14pm
Frank will certainly be missed by anyone who had contact with him- he treated everyone the same - with honesty- kindness- and his quick witted humor. We are better for knowing him. May you be able to smile thru your tears during this difficult time. Sending love and hugs. Kathy Oliverson (Clip Shop)
Comment Share
Share via:
RS

Posted Nov 05, 2020 at 12:18pm
I have fond memories of Frank from teaching at Drury H.S. My wife, Peggy, did her student teaching under him as well. I remember especially his wit and how dedicated he was to the North Adams Teachers' Association. He was a good mentor and a good friend. Bob Scrivens
Comment Share
Share via:
CH

Posted Nov 04, 2020 at 03:30pm
As a high school student at Drury High, I always looked forward to Mr. Merrigan's quick sense of humor and his kindness. As an adult, it was always great to run into him - at softball games - and talk with him. He was truly one of a kind and he will be missed. The world was definitely a better place for having Mr. Merrigan part of it! Rest in Peace sir!
Comment Share
Share via: 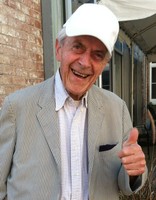