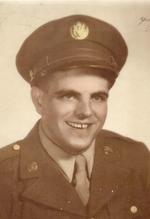 Rolland Francis Roy, 98, of Pownal, VT died on Wednesday, November 18, 2020 at his home. He was born in North Adams, MA on June 20, 1922 a son of the late Calix “Chick” Roy and Edith (Trombley) Roy. He attended schools in North Adams. He was employed at W.R. Grace in Adams, MA for over 40 years. He was a decorated veteran in the US Army during WWII. Rolland reached the rank of Sergeant with Company B-110th Infantry Regiment and was involved in the invasion of France on D-Day and was wounded in the battle of Saint-Lo France. He was the recipient of a Purple Heart, Good Conduct Medal, Victory Medal and the European African Middle Eastern Theater Campaign Ribbon.
Mr. Roy was a communicant of Our Lady of Lourdes in Pownal and also attended Sts Patrick and Raphael in Williamstown, MA and St. Elizabeth of Hungary Church in North Adams, MA. He was a member of the Clarksburg VFW and the Williamstown American Legion where he was a member of the honor guard. Rolland also was a former member of the South Pownal Volunteer Fire Department and loved Golfing and bowling.
Mr. Roy married the former Carmelina Maria Roffinoli on February 8, 1947 in the St. Patrick’s Church in Williamstown. She died on December 28, 2010. Survivors include his daughter, Barbara Roy- Kittler and her husband, Arthur of North Adams, a son, Peter A. Roy and his wife, Christine of Holyoke, MA as well as his grandchildren; Peter A. Roy and his wife Andrea, Keith M. Roy and his wife Stephanie, Nicholas L. Roy and Alyson R. Kittler and great grandchildren; Viktoria Roy, Olivia Roy and Owen Roy and several nieces and nephews. He also leaves his companion Pauline Ellsworth. Mr. Roy was predeceased by three brothers; George, Donald and Lionel Roy and four sisters; Rita Styczynski, Exilda Suprenant, Beatrice Pierce, and Melva Hoynoski.
FUNERAL NOTICE: A graveside service and burial with full military honors for Rolland Roy will be held Saturday November 28, 2020 at 10AM at Eastlawn Cemetery. The service will be broadcast live on Flynn & Dagnoli Facebook please visit Facebook and "Like" the page. Memorial donations may be made to Pownal Recue Squard or to the South Pownal Fire Department in care of the Flynn and Dagnoli Funeral Home, Central Chapel, 74 Marshall Street North Adams, MA. To add to the Book of Memories, please visit www.flynndagnolifuneralhomes.com.