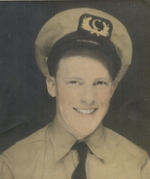 Robert Choquette 94, of Adams, MA, died Friday November 20, 2020 at Hillcrest Commons. He was born in Adams on February 15, 1926 a son of the late Nector and Yvonne (Martin) Choquette. He attended schools in Adams and was a decorated paratrooper veteran of WW II serving with the United States Army and the Merchant Marines. Robert was employed for many years at the General Electric Co. in Pittsfield. He was an avid golfer and was a member of the Waubeeka Golf Links. He enjoyed horse racing and the New York Giants.
His wife Shirley Mildred (Hardy) Choquette whom he married May 6, 1945 died August 10, 2007. Survivors include his children Donna Renzulli and her husband Michael of The Villages, FL. and Russell Choquette of New Ashford, MA. Two grandchildren Derek Choquette and his wife Victoria and Tracy Choquette. Three great-grandchildren Hannah, Owen and Peyton Choquette and a great-great grandson Auden. Mr. Choquette was predeceased by eight brothers and sisters.
Private Burial for Robert Choquette will take in the family plot in Bellevue Cemetery, Adams, MA. To add to the Book of Memories, please visit flynndagnolifuneralhomes.com.