To share your memory on the wall of Raymond Porter, sign in using one of the following options:

FUNERAL NOTICE: The funeral for Raymond Porter will be Saturday February 27, 2021 at 10:00 AM at FLYNN & DAGNOLI-MONTAGNA HOME FOR FUNERALS, WEST CHAPELS, 521 West Main St. North Adams. Burial will follow in Bellevue Cemetery. A live-stream of the service will be available on the Flynn & Dagnoli Facebook Page. Calling hours at the funeral home are Friday from 4-7 PM. Memorial donations may be made to Hospice Care in the Berkshires in care of the funeral home. To add to the Book of Memories, please visit www.flynndagnolifuneralhomes.com
Read Less

To send flowers to the family or plant a tree in memory of Raymond Alton Porter, please visit our Heartfelt Sympathies Store.

We encourage you to share your most beloved memories of Raymond here, so that the family and other loved ones can always see it. You can upload cherished photographs, or share your favorite stories, and can even comment on those shared by others.

Ron & Dar Porter, Family of Jeanne Smallwood, and other have sent flowers to the family of Raymond Alton Porter.
Show you care by sending flowers

Guaranteed hand delivery by a local florist
IS

I am so glad I happened to be looking at the obituaries in The Eagle today and discovered your Dad had passed. I loved to talk gardening with Ray after church on Sundays. I still grow his heirloom Italian pole beans (the large flat green ones with purple streaks) every year from the original seeds he gave me over twenty years ago. I even sent some of the seeds to a man who grows heirloom vegetables in Iowa and he now sells them in his seed catalog! I think of Ray every spring when I plant those beans, and now that he's gone planting them will be a little memorial to his memory.
Comment Share
Share via:
HS

Flowers were purchased for the family of Raymond Porter. Send Flowers

Posted Feb 24, 2021 at 01:58pm
To the family of Uncle Raymond: We are so sad of the passing of Ray but he is with God in Heaven. Our thoughts and prayers are with all of you. 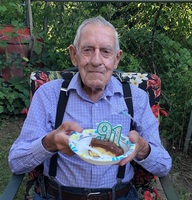