To share your memory on the wall of Mary Mayer, sign in using one of the following options:

Daughter of Franklin Minnich and Elizabeth Hershey Workman, Mary Elizabeth was born and grew up at her beloved family farm, occupied by generations of Workman’s since the ... Read More
Mary Elizabeth Workman Mayer
March 30, 1929-March 6, 2021

Daughter of Franklin Minnich and Elizabeth Hershey Workman, Mary Elizabeth was born and grew up at her beloved family farm, occupied by generations of Workman’s since the 18th century, in East Petersburg, PA on March 30, 1929.

Mary attended Millersville College, where she met the love of her life, Robert W Mayer (Bob). They were married in 1951 just before Bob left for Germany to serve in the CIC (Counter Intelligence Corps) during the Cold War. When he returned, they settled in Newark, Delaware to pursue their careers and where they would stay to enjoy full and productive lives for 60 plus years.

Mary taught first grade for 25 years, primarily at Christiana Salem Elementary School. She was a much admired teacher and conducted a vibrant classroom where she played the piano and led the children in song with her trained singing voice. Her greatest joy was teaching children to read and putting on plays in which she often sewed the costumes. She was also a Girl Scout leader for many years.

Mary was devoted to her family and weekends were often spent driving to Lancaster County to help aging relatives and visit the farmers markets that Lancaster County is known for. In the early years, she and Bob took up competitive rally driving in their vintage MG’s, with Mary navigating and Bob driving madly through the countryside. In later years, they spent weekends sailing on the Sassafras River and Chesapeake Bay. Mary especially loved to cook and entertain and she and Bob were known for throwing great parties from crab feasts to multiple course dinners to orchestrating high tea for the multitudes at “A Day in Old New Castle.” “Fun” was high on the priority list at the Mayer household.

In retirement, Mary and Bob traveled and pursued many interests including everything the University of Delaware had to offer—plays, music, sports, etc. Mary was a docent at the historic Allee House at Bombay Hook National Wildlife Refuge where Bob and she spent many happy hours observing migratory birds and volunteering. They were active at Immanuel Episcopal Church, New Castle, where she served on the Altar Guild right up to the age of 87. She was an active member of the Delaware Herbalists and the Arasapha Garden Club.

For the past four and a half years, Mary has lived in Williamstown, MA with her daughter and son-in-law.

Burial will be at a future date at Immanuel Episcopal Church on the Green, New Castle, DE. To add to the Book of Memories, please visit www.flynndagnolifuneralhomes.com
Read Less

To send flowers to the family or plant a tree in memory of Mary Elizabeth Mayer (Workman), please visit our Heartfelt Sympathies Store.

There are no events scheduled. You can still show your support by sending flowers directly to the family, or planting a memorial tree in memory of Mary Elizabeth Mayer (Workman).
Visit the Heartfelt Sympathies Store

We encourage you to share your most beloved memories of Mary here, so that the family and other loved ones can always see it. You can upload cherished photographs, or share your favorite stories, and can even comment on those shared by others.

Posted Mar 15, 2021 at 04:02pm
Norma and I were saddened to learn of the passing of Mary Elizabeth. Mary Elizabeth and Bob were our next-door neighbors when we lived in The Oaklands (1986-1996) and we have many, many fond memories of the happy hours spent together. They were both truly fun people. When we had snow storms, the four of us would clear our own sidewalks and drive ways and then clear the sidewalk of their "extra" lot between our two houses--working both ends toward the middle. When we met in the middle and performed the final clearing, there would always be an impromptu "show shoveling party" in their family room in front of their beautiful fireplace, warming our bodies with the fire and our spirits with a glass of sherry!

Beth, Alex, Peter, and, Samuel we extend our sincere sympathy to you. We know there is a void in your lives but know that you, too, have wonderful memories of this truly outstanding couple. You are in our thoughts and prayers at this difficult time. Our love to you all. Sincerely, Norma and John Clayton
Comment Share
Share via:
HS

Posted Mar 13, 2021 at 09:35am
To Beth and her family: We saw your mother's obituary in the Wilmington, DE paper this morning. She was a dear and special person and I was fortunate to have her as my first grade teacher at Central Elementary School all those years ago. Please accept my deepest sympathy for this loss. I will hope to attend her burial at Immanuel On The Green when the time for that is decided. May the angels welcome her to paradise.
Comment Share
Share via:
HS

Posted Mar 13, 2021 at 08:10am
I have so many fond memories of time spent with the Mayers. Mary was my brother’s 1st grade teacher & that’s how the Mayers & Pintos became friends. Mary was so kind, generous and lots of fun. She hosted parties for my brother & for me before we were both married. God rest her soul & God’s peace for all the family. With love, Sally Pinto Krapf
Comment Share
Share via: 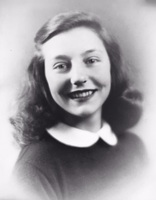