To share your memory on the wall of George Fischer, sign in using one of the following options:

To send flowers to the family or plant a tree in memory of George William Fischer, please visit our Heartfelt Sympathies Store.

We encourage you to share your most beloved memories of George here, so that the family and other loved ones can always see it. You can upload cherished photographs, or share your favorite stories, and can even comment on those shared by others.

Posted Mar 15, 2021 at 01:22pm
George was a valued friend and class mate, he was there when I needed him and I tried to be there when he needed me. My friend will be sadly missed. I would like to say how sorry that I feel at his passing and wish his family all the best in this trying time
Comment Share
Share via:
TE

Posted Mar 13, 2021 at 12:10pm
With our deepest sympathies to the Fischer and Armstrong families.

Posted Mar 13, 2021 at 07:41am
I was sad to hear of George's passing. A fellow '66er, I had lost track of him over the years. It sounds like he led a full and varied life, following his heart in work and family. I know he will be missed.
Carol Marsh Mayer
Class of 1966
Comment Share
Share via: 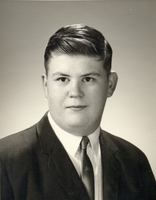