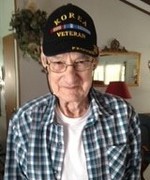 Donald Daniel Gagne, 90 of North Adams passed way on Friday, March 19, 2021 at North Adams Commons. Donald was born on May 30, 1930 in North Adams, MA a son of the late Romeo & Irene (Serre) Gagne.
He attended schools in North Adams and Drury High School. Donald was a decorate veteran of the United States Army- serving in the Korean War where he received the distinguished purple heart.
Donald is the widow of Elizabeth Ann (Zappone) Gagne whom he married on October 24, 1953 in St. Anthony Church, she passed way on May 10, 2016. Following his military career he returned to North Adams Brightwater paper company. Donald worked for the water department in North Adams for 14 years as a heavy machine operator. He also worked at the History Valley Park for two years and was a bartender at the American Legion. For ten years he did maintenance at Wheel Estates and retired in 1992. He also worked part time for Bennington School Inc until 1994.
Donald was a communicant of the form St. Anthony Church in North Adams and a life member of DAV, VFW#996, American Legion Post #125 and a former member of the Greylock community club.
Donald is survived by his daughter, Susan Wabnig of Plainfield, MA and his three sons, David Gagne of Florida, MA, Robert Gagne of Kansas City, and Donald Gagne of North Adams, Ma and his brother, Edward Gagne of North Adams. He also leaves 10 grandchildren, 1 great grandchild, and 2 great great grandchildren as well as many nieces and nephews. Donald was predeceased by his three brothers, Albert Gagne, Michael Gagne & Roland Gagne.

FUNERAL NOTICE: A liturgy of Christian Burial for Donald Gagne will take place on Thursday, March 25, 2021 at 11:00 AM at St. Elizabeth of Hungary Church. Burial will follow in Southview Cemetery. Donations may be made to Pop Cares P.O Box #482 Williamstown, MA.01267 or through the Flynn & Dagnoli Funeral Home- CENTRAL CHAPEL 74 Marshall St. North Adams, MA 01247. To add to the Book of Memories, please visit www.flynndagnolifuneralhomes.com.