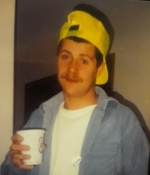 Stephen Michael Stone, 56 of North Adams, MA died Tuesday March 16, 2021 at his home.
He was born in Troy, NY on September 24, 1964, a son of the late Ralph Alan Stone and Myra Jean (Slocum) Stone. He attended schools in Hoosick Falls, NY and North Adams, MA including the Drury High School.
Stephen was a self-employed laborer. Steve loved camping, hiking in the mountains, skiing and family gatherings. His family was his world.
Survivors include one daughter- Kimberly Stone of Bennington, VT and two grandchildren- Greyson and Aubrey. He also leaves four sisters including Tammie Stone and Melinda Prebble of Hoosick Falls, NY and Tina Stone and Fredericka Neville of North Adams; one brother- Frederick Hoag of North Adams and nieces and nephews. He was predeceased by two brothers- Ralph A. Stone Jr. and Jeffrey Hoag.

FUNERAL NOTICE: Services for Stephen Stone will be private. Burial will be in the Hoosick Cemetery in Hoosick Falls, NY. The Flynn & Dagnoli Funeral Home is in care of arrangements. To add to the Book of Memories, please visit www.flynndagnolifuneralhomes.com.