To share your memory on the wall of Paul Christopher, sign in using one of the following options:

Print
Paul W. Christopher, 72, of Pittsfield, MA passed away unexpectedly, yet peacefully at his home on Friday, 9 April 2021. Father - Devoted Family Member -Musician-Veteran. Paul was an inspiration to so many and a great American.

Upon ... Read More
Paul W. Christopher, 72, of Pittsfield, MA passed away unexpectedly, yet peacefully at his home on Friday, 9 April 2021. Father - Devoted Family Member -Musician-Veteran. Paul was an inspiration to so many and a great American.

Upon graduating from Pittsfield High School, he joined the U.S. Navy in 1968 and was assigned to duty on the destroyers USS Cony (DD-508) and USS Warrington (DD-843) with missions to track Soviet submarines and ships in the North Atlantic. He frequently recounted his time on the high seas, often in austere and dangerous conditions encountering Soviet warships, which they would follow for days as a Cold War deterrence and to gain intelligence on the Soviet fleet. Throughout his naval time he would meet many shipmates who would remain lifelong friends.

Following his military service he returned to Pittsfield and went to work as a laborer on the Bear Swamp hydroelectric power project along the Deerfield River, during which time he attended Berkshire Community College to become a computer programmer analyst and began raising a family. He worked for many years as a programmer at General Electric in Pittsfield, and then later in life at the state and community colleges until his retirement in 2016. He was a musician throughout his life, master of the horns, playing in drum corps and many local bands. Most notable was his time with the band Cold Duck that was a legend from the ‘70s through the early ‘80s playing throughout Western Mass. In more recent years he formed the local Red Knights Drum and Bugle Corps helping local youth to learn music and perform throughout New England. His joy was his time with family, his many friends and sharing his love and knowledge of music — it is certain that he continues to strike up the band with those he is now reunited with.

To send flowers to the family or plant a tree in memory of Paul William Christopher, please visit our Heartfelt Sympathies Store.

We encourage you to share your most beloved memories of Paul here, so that the family and other loved ones can always see it. You can upload cherished photographs, or share your favorite stories, and can even comment on those shared by others.

Posted Apr 17, 2021 at 11:05am
A very sad day to learn of the passing of your father, Paul. So happy he was able to have the drum corp reunion. He worked so hard and it was a total success. A great time was had by all. May all of your wonderful memories help you during this very difficult time. Love, Joanne and Dave
Comment Share
Share via:
BB

Posted Apr 13, 2021 at 11:54am
Condolences to Paul's family. He was a fellow member of the Pittsfield Cavaliers drum & Bugle corps and one of our best horn players. a very smart and funny guy. We'll miss him at our reunions.
Comment Share
Share via:
MM

Posted Apr 12, 2021 at 04:05pm
Condolences to Eric, Dean, Ryan, Jerry and the extended Christopher family on Paul's passing. Paul was one of those rare people who possessed an extraordinary amount of both talent and humility. We have been friends for over 60 years and I am going to miss him terribly.
Mike McMahon
Comment Share
Share via:
LG

Posted Apr 12, 2021 at 10:57am
Please accept our most heartfelt sympathies for your loss... Our thoughts are with you and your family during this difficult time. 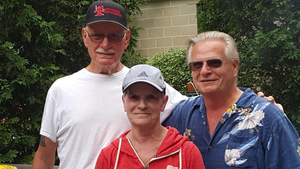