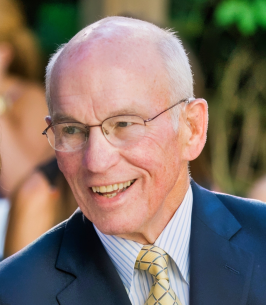 William Brown Burnett died peacefully on November 24, 2021, the day before Thanksgiving. He was a man full of gratitude and wonder for the life that he lived, having been the first member of his family branch to reach the 80-year mark on October 19.

Bill was born in Detroit, Michigan, in 1941, the second of four boys. He grew up on Chesterfield Avenue in Birmingham and graduated from Cranbrook School, where he was captain of the football team. He enrolled at Williams College where, he would later joke, he barely survived the academics but succeeded brilliantly as social director of his fraternity, hiring popular bands to play around campus on Saturday nights. He was also a proud if not most valuable member of the Williams College football team.

While working at Time Life, Inc. in New York City in 1966, he met Miranda Schuler at a concert in Central Park and was sufficiently eager to start their life together that he married her the following year, against his father’s advice to earn his MBA first.

Bill and Miranda spent their initial years in Charlottesville, Virginia, while Bill studied at Darden, and then settled in his hometown of Birmingham, Michigan, where Bill led Marketing at Difco Laboratories, a microbiological company his grandfather co-founded. Bill succeeded his uncle and father as CEO in 1987 and ten years later sold the company to Becton, Dickinson. He began his retirement at the age of 56. It was his life’s busiest chapter.

Bill was unfailingly interested in countless topics. He loved learning, reading, highlighting, clipping and filing. He rarely met an email he did not want to print, and it’s fair to guess that several forests will thrive with his passing. He believed in tradition and bringing people together and was the energetic organizer of multiple meaningful reunions, including the extended Burnett family and the Williams College Class of ’63 50th Reunion. A man of faith, he contributed generously to the First United Methodist Church of Birmingham, including leading their Crop Hunger Walk.

Bill valued productivity, problem-solving, duty, loyalty, oratory, progressive achievement in any field of endeavor and, most of all, the centrality of family. He would not settle at the dinner table until he had kissed every family member on the head and made sure their chair was scooted in. He had the will of an ox and the heart of a lamb. He loved laughter, red wine, a good steak, jazzy music, dancing, international travel, weather reports, winners, a well-told story and anything chocolate. For him, life without ice cream and sports was not a life worth living. Life without Miranda was also significantly diminished, and though he stayed busy, vital and positive after Miranda passed of sudden-onset brain cancer in April, he felt no regrets over joining her.

Bill was preceded in death by his brother, David, and is survived by what he would likely call his proudest achievements: his son Bill and Bill’s wife Sigrid, his daughter Elizabeth and her partner Stacy, and his granddaughters Hanna and Lily, who called him “Ampa.” He will also be fondly remembered by his brothers Bob and Bruce and many beloved cousins, nieces, nephews, other relatives and admiring friends.

In lieu of flowers, the family requests that charitable donations be directed to Cranbrook Schools, where gifts in Bill’s memory will be used to promote innovation in science through the acquisition of equipment that facilitates students’ scientific learning and discovery. Checks may be marked “In Memory of Bill Burnett ‘59” and sent to the Cranbrook Advancement Office, PO BOX 778761, Chicago, IL 60677-8761. Gifts may also be given online at https://cranbrook.myschoolapp.com/page/giving/give-now?siteId=1273&ssl=1. Be sure to type “Bill Burnett ‘59” in the box that reads “In Honor Of.” (If you’re unable to click on the link, please cut and paste the link to your browser.)