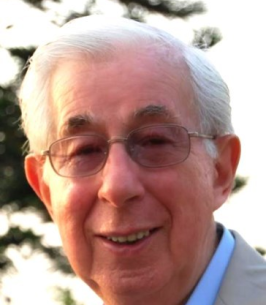 Robert "Bob" Bashevkin, beloved husband, father, father-in-law, grandfather, great-grandfather, and uncle, passed away at the age of 91 on December 11, 2021. The youngest of 9 children born to David and Annie (Feder) Bashevkin, Bob came into this world on June 6, 1930, was raised in North Adams, Mass., and remained a proud, devoted, and active member of the northern Berkshires community until 2018, when he followed in his late brother Irving's footsteps to Sarasota, Fla. to spend his last years at Kobernick House.

Bob is survived by Barbara (Cremer) Bashevkin, his wife of 66 years, and their three children Sharon Bashevkin Perry of Jerusalem, Israel, Martin Bashevkin of Oslo, Norway, and Joel Bashevkin of Berkeley, Calif. He is remembered as a loving grandfather to Maayan, Avital, Isaak, Noah, Tobias, Omer, and Hannah, father-in-law to Simon Perry, Elin Bashevkin, and Sarah Herman, and great-grandfather to Ilai, Eitan, and Barak.

Grounded by deeply held values and a strong sense of duty to his community, Bob led a life of civic leadership with humility and purpose. He began his career in the family business, Butler Coal and Grain Company, later Butler Wholesale Product, Inc., going on to lead the company until his retirement in 1994. In his later years, Bob managed the RIB Realty Corporation together with his brother Irving.

A lifelong champion of countless organizations and causes in the Berkshires, Bob proudly served as Board President at Congregation Beth Israel in North Adams and as President of the Jewish Federation of the Berkshires. With his wife Barbara, Bob was a founding donor to the Massachusetts Museum of Contemporary Art (MASS MoCA) and longtime supporter of the Massachusetts College of Liberal Arts (MCLA).

When not at work or spending time with family, Bob could be found sitting courtside at most (if not all) Williams Ephs Basketball home games or in the bleachers cheering on the Steeplecats, visiting Chenail's farm stand for the world's best fresh corn and tomatoes or tending to his backyard vegetable garden at his home on Bulkley Street, where he and Barbara shared many of their happiest years together. His family will remember his warm humor and taste for the gourmet, and live by his generosity of spirit and gentle dignity.

A funeral service will take place in Sarasota, Fla. at 12pm on Tuesday, December 14 and will be accessible via special link for all those who wish to attend virtually.

Bob will be buried at the Beth Israel Cemetery in Clarksburg, Mass., at 2pm on Thursday, December 16.

In lieu of flowers, please consider making a donation to Congregation Beth Israel in North Adams (cbiweb.org), the Jewish Federation of the Berkshires (jewishberkshires.org), or MASS MoCA (massmoca.org), or in his memory contribute to a cause of your choice that supports the health and spirit of your community.