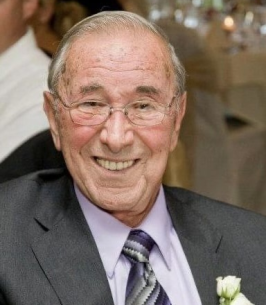 Genesio Anthony "Gene" Breda, 94, a lifetime resident of North Adams, MA, passed away on Tuesday December 28, 2021 at Berkshire Medical Center after a long term illness.
He was born in North Adams on September 18, 1927, son of Joseph D. and Rosina (Do'Nofrio) Breda. He attended local schools and graduated from Drury High School.
Mr. Breda was a World War II veteran of the US Navy and received his Civil Engineering degree in Chicago, IL. Upon completion of his degree, he returned to North Adams and gave 41 years of service to the City of North Adams as both City Engineer and Commissioner of Public Services until his retirement in January of 1990.
His engineering expertise positively impacted the City, including Main Street, City Hall, the Hoosac Water Quality District and the Eclipse Mill Dam to name a few. Mr. Breda also helped to build the Parish Center of St. Anthony of Padua Catholic Church where he was a devout communicant and active parishioner.
Genesio was also a longtime impressive member of the Berkshire County Italian American Association (CIAO) and was the 9th recipient of the "Outstanding Italian American Award" and was cherished by all.
Gene was an avid gardener with an unrivaled green thumb. He took great pride in his bountiful and immaculate annual vegetable and fruit gardens, with emphasis on his treasured harvest of garlic.
Gene enjoyed holding Family Reunions each summer which were a great source of pride and admiration for him and his family and friends. His love of the game of bocce (and a Beefeater martini, olives on the side) were always a highlight at the family events. Family was his biggest source of pride, and he will be immeasurably missed.
Mr. Breda was a devoted husband to his wife, Dorothy Betty (Genesi) Breda who passed away on August 20, 2003. They were married on May 28, 1949. He was a loving father to his eight daughters who survive him- Marlene Haas of Lanesboro, MA; Jean Breda Noyes of Port Richey, FL; Barbara Breda Bolte of North Adams, MA; Lynne Breda of Pinellas Park, FL; identical twins- Donna Breda Turner and Debbie DeMarsico, both of Pittsfield, MA; Janice DiStefano of Glastonbury, CT and Nancy Vittone of St. Petersburg, FL. He also leaves 15 Grandchildren; 18 Great Grandchildren; 1 great great grandson (with another arriving 2/2022) and nieces and nephews. He was predeceased by two brothers and one sister, John Batrano, D. Albert Breda and Mary Sullivan.

FUNERAL NOTICE: A Liturgy of Christian Burial for Genesio A. Breda will be celebrated Tuesday January 4, 2022 at 11:00 AM at St. Elizabeth of Hungary Church. Burial will follow at Southview Cemetery. Calling hours are at FLYNN & DAGNOLI-MONTAGNA HOME FOR FUNERALS, WEST CHAPEL, 521 West Main St. North Adams, MA on Monday, January 3 from 4-7 PM. To add to the Book of Memories, please visit www.flynndagnolifuneralhomes.com.
Immediately following the funeral services at Southview Cemetery, a reception will be held at St. Elizabeth of Hungary Parish Hall, 70 Marshall Street, North Adams, MA 01247. All are invited to attend.