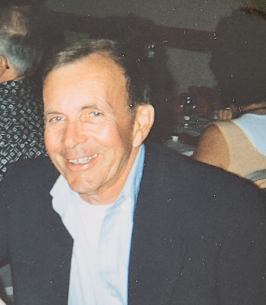 NORTH ADAMS, Mass – George Barone, 84, of North Adams passed away at home on Friday, February 4, 2022, with family.
He was born in North Adams on July 18, 1937, the son of Italian immigrants, Guido and Emma (Meschia) Barone.
George graduated from Drury High School and went directly into the Air Force. He was stationed in Japan from 1954 until 1958 as a radio operator and cryptographer. In his free time, he explored the country and even climbed Mount Fuji.
Upon his return home, George went to work for Sprague Electric Co where he was employed for forty years as an Electronics Engineering Technician, save the ten week-strike of 1970, and took night classes at the State Teachers College of North Adams (now MCLA). During the strike, he took a job working at (the now) Vietnam Veteran’s Memorial skating rink.
He had many self-taught talents including the guitar and would have weekly jam-sessions with his friends. He could fix anything, including renovating his first home. He was an avid skier and taught his daughter the love of the slopes at an early age. Dirt-bike riding and motorcycles were other favorite pastimes along with Cribbage in his later years. He enjoyed traveling with his family, taking several cruises, visiting Switzerland, Italy, and countless towns and cities throughout the States. He had the gift of storytelling, bringing to life his memories, especially those of Italy and his dog, Tarzan.
He was predeceased by his son, Dominique, and his wife, Lucille (Lucy) of 57 years. He is survived by his daughter, Kim and her husband, Carlos Serrano, his granddaughter, Amy and her husband Ash Khamas, his granddaughter, Heather Michaels, Ph.D., his niece, Diane and her husband Gary Phillips, his niece, Melody and her husband Ben Luttmann, his grandniece, Kristy Phillips and her husband Matt Rippere, and a great-grandniece, Kira Phillips Rippere. He had a heart of gold, was patient, kind, and generous, dearly loved and will be deeply missed.

FUNERAL NOTICE: Private Funeral Services will be held Saturday, Feb 12, 2022. Burial will follow in the family plot in Southview Cemetery. In lieu of flowers, donations may be made in George’s memory to Hospice of Western & Central Massachusetts at 55 Church Street, Pittsfield, MA 01201 or the Stratton VA Medical Center at 113 Holland Ave, Albany, NY 12208. To add to the Book of Memories, please visit www.flynndagnolifuneralhomes.com