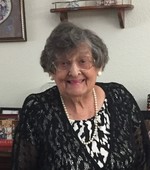 Alice Elias (Rizkallah) Samia, 88 formerly of North Adams, MA died Friday April 29, 2022 in Illinois with her daughters by her side.
She was born in Methuen, MA on June 24, 1933, a daughter of Elias and Najibe (Ryah) Rizkallah. She attended schools there and graduated from Searles High School. She completed her business degree from MacIntosh Bryant Business School.
Alice was last employed by Stop & Shop in North Adams where she worked for 21 years until her retirement at the age of 80. She had also worked at Sprague Electric Co. and within the North Adams Public School System.
She was a communicant of St. Elizabeth of Hungary Church and was a member of Court Margaret #629 of the Catholic Daughters of the Americas, where she served as treasurer. Alice was also a member of Triad, the Adams Lions Club and the Ladies Auxiliary of Post #125 American Legion, holding various board positions. She enjoyed puzzles, music, reading and travel and especially enjoyed spending time with her grandchildren and great grandchildren. She was an avid fan of the Boston Red Sox, maintaining that loyalty while residing in Chicago.
She was the widow of Asife "Ace" Samia who died May 1, 1990. They were married on November 7, 1954. Survivors include two daughters- Carol Ann (Christopher Eiser) Samia-Eiser of Batavia, IL and Jane (David) Fullerton of Southerland, OR, Son James Samia of Hudson, FL and two grandchildren- Dan Samia and Rita Fullerton. She also leaves four great grandchildren including Marleigh, Steele, Sailer and Hunter; two sisters- Margaret Zinno and Mary Bowman; one brother- Joseph Rizkallah and nieces, nephews, grandnieces and grandnephews. She was predeceased by her granddaughter- Nicole Samia, brothers John and Elias Rizkallah and sisters Julia, Florence and Victoria.
FUNERAL NOTICE: A Liturgy of Christian Burial for Alice Samia will be celebrated Saturday May 7, 2022 at 10:00 a.m at St. Elizabeth of Hungary Church. Burial will follow in Southview cemetery. A calling hour will be held at FLYNN & DAGNOLI-MONTAGNA HOME FOR FUNERALS- CENTRAL CHAPEL, 74 Marshall St. North Adams, MA on Saturday from 9-10 a.m. Flowers can be sent to the funeral home. To add to the Book of Memories, please visit www.flynndagnolifuneralhomes.com.