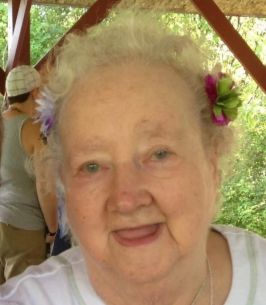 Dorothy Bessie (Garceau) Vallieres, 92, of North Adams, MA died on Monday, May 30, 2022 at Berkshire Medical Center. She was born in Adams, MA on November 16, 1929, daughter of the late Joseph E. Garceau and Bessie Mae (Felix) Garceau. She arrived to North Adams when she was a few months’ old and attended schools in North Adams.
Dorothy married Paul E. Vallieres on April 26, 1947 at St. Francis Church in North Adams and together they raised thirteen children. Paul predeceased her in 1994.
Dorothy was employed in her earlier years as an usherette at the Mohawk Theatre. She was also a sales lady at F.W. Woolworth Store in North Adams and also worked at Model Laundry and White Laundry, and also for Berkshire Fine Spinning Associate, Greylock Division in North Adams. She was last employed at Sprague Electric, from where she retired in 1952. After retirement she was self-employed as a domestic for various homes in the Williamstown area.
Dorothy was a former communicant of Our Lady of the Incarnation Church and later at St. Elizabeth of Hungary Church in North Adams. She was a devoted and loving wife, mother, grandmother and great-grandmother.
Dorothy is survived by her sons 7 sons; Arthur R. Vallieres (Janet) of Clarksburg, Joseph E. (Shirley) Vallieres, Robert D. (Elizabeth) Vallieres , Gerard A. (Diane) Vallieres , Thomas J. (Debbie) Vallieres, John E. (Sarah) Vallieres, Mark Vallieres, all of North Adams; and her 5 daughters; Dorothy E. Vallieres, Mary L. (Donald) Blay, Pauline M. Longtin with whom she made her home, Theresa (Richard) Verrier and Polly A. Strange, all of North Adams. She was predeceased by her son Paul E. Vallieres, Jr. sister Bessie Morin and brother Joseph E. Garceau, Jr. Dorothy leaves behind several grandchildren, great grandchildren, nieces, nephews, grandnieces and grandnephews.
A Liturgy of Christian Burial for Dorothy Vallieres will be Friday, June 3, 2022 at 10:00 A.M. at St. Elizabeth of Hungary Church, North Adams. Burial will follow in the family plot in Southview Cemetery, North Adams, MA. Calling Hours at the Flynn & Dagnoli Funeral Home, WEST CHAPELS, 521 West Main St. North Adams, MA. are Friday from from 8:30 A.M – 9:30 A.M.
Memorial donations may be made in her memory to St. Elizabeth of Hungary Church or to any favorite charity of a donor’s choice. To add to the Book of Memories, please visit flynndagnolifuneralhomes.com.