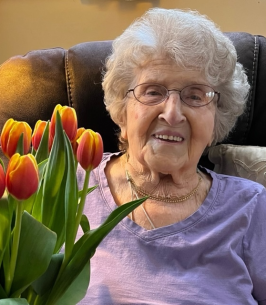 NORTH ADAMS – Bernice H. “Red” (Owczarski) Alcombright, 98, of North Adams passed away peacefully on Saturday, June 4, 2022 in the comfort of her home. She was the wife of former longtime North Adams City Councilor, Daniel F. Alcombright Jr. who died in 2000. They were married on February 23, 1946
Red was born in Adams, MA on November 27, 1923 and was the daughter of the late Stephen and Helena (Brzezowska) Owczarski. She attended Adams schools and was a proud member of the St. Stanislaus Kostka School Class of 1937. She then went on to graduate from the Berkshire School of Hair and Beauty Culture in 1942. After her graduation from beauty school, she went to work as a hairdresser at the former Helen’s Beauty Shop in North Adams. In 1951 she opened Red’s Beauty Salon on Massachusetts Avenue in North Adams which she owned and operated out of her home until her retirement in 2015 at the age of 92.
Red was a member of St. Elizabeth of Hungary Parish in North Adams and was a member of the St. Elizabeth of Hungary Rosary Sodality. She was also a member of the St. John Paul II Rosary Sodality. She belonged to the North Adams American Legion Post 125 Ladies Auxiliary and was a longtime bowler with the Rosary Bowling League. She enjoyed knitting, traveling to see family, baking, and cooking Polish food for her family and friends. Above all, Red’s greatest joy in life was spending time with her children, grandchildren and great grandchildren.
She is survived by her four children, Patricia M. Beausang of Poland Spring, ME; Donald F. Alcombright and his wife Brenda of Plymouth, MA; Richard J. Alcombright of North Adams; and Daniel S. Alcombright and his wife Nancy of Tucson, AZ; Eight grandchildren, Jodi Mulcahy (Jonathan), Casey Alcombright (Eric Lavoie), Rebecca Leighton (William), Donald J. Alcombright (Tami), Matthew J. Alcombright, Nicole Fiel (Christopher), Cari Alcombright (Jacob Bruce) and Ashley Alcombright; and nine great grandchildren, Marlee, Graham and Rowann Mulcahy, Cyrus Leighton, Connor and Olivia Alcombright, Helen Lavoie, Milania Alcombright, and James Bruce; her sister, Frances Meier of Adams, MA and her sister-in-law, Rita Owczarski of Belchertown, MA. She was preceded in death by her infant son, Joseph Daniel “Jody” Alcombright; two brothers, Stanley “Red” Owczarski and Casimir “Boots” Owczarski; and her son-in-law, Edward “Ned” Beausang.
While Red has always been a proud member of St. Elizabeth of Hungary Parish, it was her wish that her Funeral Mass be held at her childhood parish of St. Stan’s where she celebrated all her other sacraments of faith. A Liturgy of Christian Burial will be held on Thursday, June 9, 2022 at 11 o’clock at St. Stanislaus Kostka Church, Summer St. Adams, MA 01220. Visitation will be Thursday morning from 9 am to 10:30 am at the church. Interment will follow in the family plot in Southview Cemetery, North Adams, MA.
In lieu of flowers, donations may be made in Red’s memory to the Northern Berkshire EMS or Elder Services in care of the funeral home, Flynn & Dagnoli-Montagna Home for Funerals, 74 Marshall St. North Adams, MA 01247. To add to the Book of Memories, please visit www.flynndagnolifuneralhomes.com.