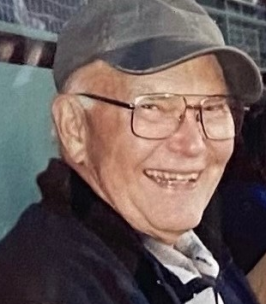 James W. Curran, a resident of Stamford, VT for 87 years died on May 29, 2022 at the Vermont Veterans’ Home in Bennington, under the care and compassion of the VVH staff and the Bennington VNA Hospice. Jim was born in North Adams, MA on October 1,1927, the second of seven children born to William L. Curran, M.D. and Bernice Curran.
The family moved to Stamford, VT in 1935. There Jim learned to swim in the icy waters of the North Branch of the Hoosic River, went tobogganing and sledding on the country roads and gentle hills and skated on the small frozen natural ponds in town. He was given a basic introduction to farming as his physician father had a working farm with milking cows and other livestock.
He attended Stamford Elementary School and Drury High School. He was a graduate of Williston Academy in Easthampton, MA. Jim enlisted in the U.S. Army serving with the 25th Infantry, 35th Regiment. He was assigned as a military policeman in the city of Otsu during the occupation of Japan. He was honorably discharged following his service. He attended Champlain College in Plattsburgh, NY and later Denver University in Colorado. His favorite authors were Robert Service and Rudyard Kipling.
Jim was always interested in sports; he followed closely the teams of Northern and Southern Berkshire high schools.
As an employee of Petricca Industries in Pittsfield, MA for 37 years (retiring in 1992), he found many of his coworkers resided in the small towns surrounding Pittsfield so he became familiar with their families and kept track of those youngsters as well as the North Berkshire athletes.
Jim was an excellent skier. He was on the former Dutch Hill ski patrol and later directed the Dutch Hill Ski School on weekends. He also enjoyed golf, living three minutes from the Stamford Valley Golf Course. He always held an annual membership and enjoyed early morning tee times with his golf buddies. He golfed until age 87.
He is survived by his wife of 66 years, Rosemarie, and nine of their ten children; Maureen, Jim, Kathryn, Patricia, John and his wife Cindy, Susan and her husband Jonathan, Jennifer, Robert and his wife Erin, and Neil. Their daughter Andrea died in 1983. He leaves 14 grandchildren and 5 great-grandchildren.
Also surviving are two sisters, Sally Smith and Sandy Johnson. His brothers, William L. Curran, Jr. M.D. and Edward A. Curran and his sisters, Marijane Green and Catherine (Nan) Sanford are deceased. He also leaves many nieces, nephews and cousins.
There are no visiting hours. A memorial service will take place at the convenience of the family. To add to the Book of Memories, please visit www.flynndagnolifuneralhomes.com.