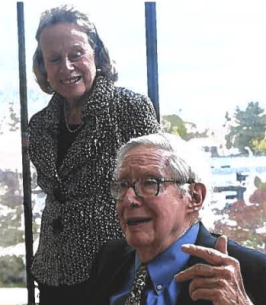 Robert Fenton Dalzell, Jr., professor, author, beloved husband, brother, father, grandfather and great-grandfather, died on Thursday, June 23, 2022.
He was born in Cleveland, Ohio, on April 28, 1937, son of Robert Fenton Dalzell and Lucile Cain Dalzell. After graduating from University School in Cleveland (Class of 1955), he ventured east to Amherst College (Class of 1959), where he discovered two of the great loves of his life: American history, and Lee Baldwin. He married both, beginning unions that lasted for the rest of his life.
He earned his Ph.D. from Yale University in 1966 and, after teaching there for a few years and beginning a family, moved in 1970 to Williamstown, Massachusetts, where he taught history and American studies at Williams College for the next 42 years, retiring in 2012.
In 1961, Bobby and LeeLee (as their grandchildren would come to know them) discovered the summer community of Sweden, Maine. Here, in the woods on Keyes Pond, the couple bought a plot of land and built a pair of cabins that became the seat of summer for their family over the coming generations.
Here, too, Robert finished the first of what would become five books that he authored and, with his wife, coauthored. He wrote for the rest of his life, turning in his last years from scholarly histories to a novel in which he tried to imagine more deeply and more personally the lives of some of the people had been teaching and thinking about for so many years.
In a lifetime that saw a great deal of social change, Robert was passionate about the national experiment and its search for political solutions that brought more to more Americans. If summers were about scholarship and writing, the remaining three seasons he devoted to the classroom – a space that for him encompassed not just his students, but his colleagues, his friends, and his family. He was a born teacher, and when he engaged in conversation, he did it with all his attention and all his heart.
Robert is cherished and survived by a brother (Andrew Dalzell); a sister (Cindy Dalzell Pitt); four children – Fred (m. Mary-Elise), Jeffery (m. Ginny), Victoria (m. Marc) and Alex (m. Yuka); and seven grandchildren – Benjamin, Nick, Abigail, Molly, Eamonn, Lucy and Emma. The last years of his life brought him further blessings, including (by marriage) new children, grandchildren and even (so far!) two great grandchildren – Morgan and Isla.
Donations in Robert’s memory can be made to University School in Chagrin Falls, Ohio; or to the Lakes Environmental Association (230 Main Street, Bridgton ME, 04009).
A private service will be held on Tuesday June 28 at the Williams College Cemetery. The family will be planning a celebration of life ceremony some time in the coming months. To add to the Book of Memories, please visit www.flynndagnolifuneralhomes.com