To share your memory on the wall of Kathryn Hayes, sign in using one of the following options:

Provide comfort for the family of Kathryn Hayes with a meaningful gesture of sympathy.

To send flowers to the family or plant a tree in memory of Kathryn Ann Hayes (Kelly), please visit our Heartfelt Sympathies Store.

We encourage you to share your most beloved memories of Kathryn here, so that the family and other loved ones can always see it. You can upload cherished photographs, or share your favorite stories, and can even comment on those shared by others.

Posted Dec 07, 2018 at 05:56pm
Frank,
Very sad news to just hear of Kathrys's passing. You took such great care of her and I know she will be missed by all who knew her.
Dave
Comment Share
Share via:
AB

Posted Dec 07, 2018 at 04:37pm
Frank, I am so sorry for you loss. I have many pleasant memories of our two families interacting when I was based in ATL. You two have a wonderful family and shared many good times together, especially at Lake Lanier. I have never forgotten you even though we have seemingly lost contact with each other. Send me an e-mail with your contact information if you would like to talk.
Comment Share
Share via: 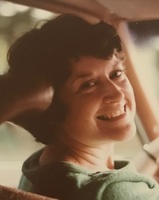