To share your memory on the wall of Kurt Williams, sign in using one of the following options:

FUNERAL NOTICE: A funeral service to celebrate the life of Kurt Williams will be Friday, August 2, 2019 at 11:00am at First Baptist Church of North Adams. Burial will follow in Southview Cemetery. Calling hours will be Thursday, August 1, 2019 from 4-7pm at FLYNN & DAGNOLI-MONTAGNA HOME FOR FUNERALS, WEST CHAPEL 521 West Main St., North Adams, MA. Donations can be made to the Alzheimers Association in care of the funeral home. To add to the Book of Memories, please visit www.flynndagnolifuneralhomes.com
Read Less

To send flowers to the family or plant a tree in memory of Kurt James Williams, please visit our Heartfelt Sympathies Store.

We encourage you to share your most beloved memories of Kurt here, so that the family and other loved ones can always see it. You can upload cherished photographs, or share your favorite stories, and can even comment on those shared by others.

Love, Kerri and Kyle, Diane and John, David and sent flowers to the family of Kurt James Williams.
Show you care by sending flowers

Posted Aug 01, 2019 at 07:26am
My condolences to the family and friends of Kurt. Many years ago I had the pleasure of calling on Kurt as a Sale Representative for a trucking company. I also enjoyed our conversations which were mostly about family and the beautiful Berkshires we both grew up in. . RIP Kurt 😢
Comment Share
Share via:
L

Love, Kerri and Kyle, Diane and John, David and

Love, Kerri and Kyle, Diane and John, David and purchased the The FTD Comfort Planter for the family of Kurt Williams. Send Flowers

Posted Jul 31, 2019 at 10:08am
To Kurt's family - My sincerest condolences to read about Kurt's passing. I had not seen him in a long time, but he was always a great guy when we were growing up. I was friends with his sister Kathy but Kurt was a classmate of my brother Marvin (who has passed away). I pray that the wonderful memories you have of Kurt will help sustain you during this sad time.

Flowers were purchased for the family of Kurt Williams. Send Flowers 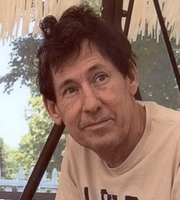