To share your memory on the wall of Joseph Dragotta, sign in using one of the following options:

To send flowers to the family or plant a tree in memory of Joseph John Dragotta, please visit our Heartfelt Sympathies Store.

We encourage you to share your most beloved memories of Joseph here, so that the family and other loved ones can always see it. You can upload cherished photographs, or share your favorite stories, and can even comment on those shared by others.

Posted Oct 30, 2019 at 07:57pm
Sorry for your loss. My mom, Natalie Mazzuchi and I send our love and prayers. My founders memories are of this tall handsome officer coming in to say hello or bring lunch from Jack’s Hot Dogs for my dad at The Studio. He was a dear cousin and friend to my mom. A gentle and caring man.
With our Love,
Natalie Mazzuchi & Ruth Mazzuchi Wickline
Comment Share
Share via:
CA

Posted Oct 27, 2019 at 07:48pm
We are sorry for your loss and wish we had words to comfort you. The loss of a parent leaves an emptiness that cannot be replaced. A part of who you are is no longer here. We last spoke with Joe about 6 weeks ago, it was not a long conversation. I only met him the one time when Charles, James, and I made the trip from Georgia to meet Charles' family. However; the yearly phone calls, made me feel like I knew your family. We hope your memories will help ease your grief. Charles and Arleen Marsden 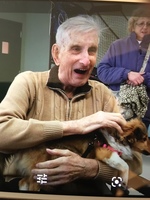