To share your memory on the wall of Gail Nelson, sign in using one of the following options:

To send flowers to the family or plant a tree in memory of Gail M. Nelson, please visit our Heartfelt Sympathies Store.

We encourage you to share your most beloved memories of Gail here, so that the family and other loved ones can always see it. You can upload cherished photographs, or share your favorite stories, and can even comment on those shared by others.

It was with deep sadness in seeing of Gail's passing. I knew not only from NARH as a great and caring to those who were in need of care, but from almost 40 years spending Christmas Day were her at the NA American Legion " Come be our Guest". She was the longest serving person starting when she was a young teen. When you to this project every year there was a way that you earned your way up the levels. In the past few years she made it to the top and became the head soup lady. She worked hard and long and was a good friend to all. May her memory be a Blessing all.
Bob Greenberg
Comment Share
Share via: 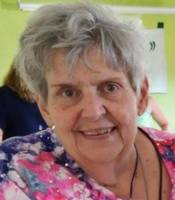